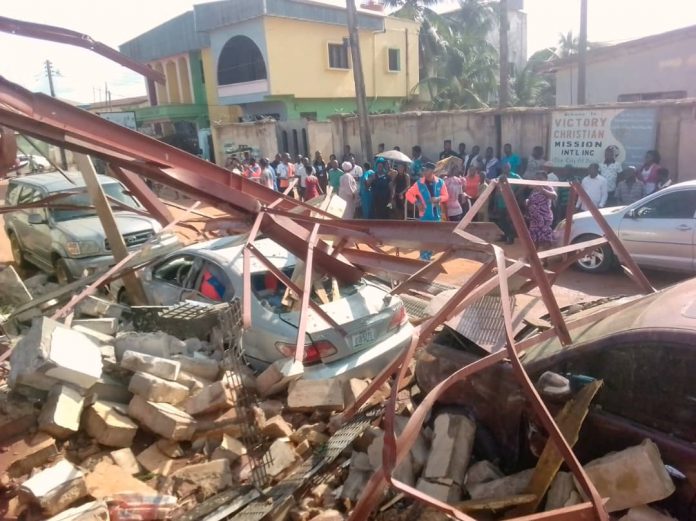 Governor Ifeanyi Okowa of Delta state and the media department of the Asaba 2018 Local Organising Committee of the ongoing 21st African Senior Athletics Championship taking place in the yet to be completed stadium in Asaba, named after a late footballer, Stephen Keshi, have reacted to the Thursday’s collapse of the poorly constructed overhead water tank located inside the stadium.

The collapsed water tank which generated series of mixed reactions and condemnations trailing the Okowa led government over the substandard job done on the water tank, left several cars and the stadium wall fence destroyed completely while several persons both young and old narrowly escaped been killed.

In his reaction, the state governor Ifeanyi Okowa said he has ordered an investigation into the remote and immediate cause of the collapsed Water Tank at the Stephen Keshi Stadium during the ongoing African Senior Athletics Championships holding in Asaba.

In a statement by his Chief Press Secretary, Mr. Charles Aniagwu, Governor Okowa described the incident as regrettable but thanked God that no life was lost.

Mr. Okowa who expressed concern over the collapse of the water tank thanked God that no life was lost to the incident.

The statement further assured that government will take necessary steps to avert future occurrence, and called on the Athletes and the enthusiastic spectators to continue to savory the beauty of the competition which so far has recorded appreciable success.

On their part, the media department of the Asaba 2018 LOC noted that the report on some news platform about the falling fence near the swimming pool area at the Stephen Keshi Stadium was sensational.

In a statement issued by Mr. Olukayode Thomas, Head of Media and Publicity for the CAA Asaba 2018, faulted the way the incidence was reported to give a wrong perception of what actually happened.

“It is unfortunate to see journalists deliberately chose not to be professional in their work. The area in question is far away from the stadium where the championship is taking place. It is also still under construction; hence no one has passed it fit for use.

“None of this was put in context but the reporter only chose to take the shine off the good work the Delta state government is doing and the excitement the African athletes are having in Asaba since the championship kicked off on Wednesday.”

Mr. Thomas however claimed that the affected cars were all outside the stadium contrary to how the report was projected.

“I am available for anyone to ask questions and seek clarity on issues, I cannot stop anybody for doing their job, but it is only proper for journalists to be factual and be balance in their reporting.”

While thanking all the media practitioners that have been giving so much publicity to the 21st African Championship which entered its third day of action on Friday, Mr. Thomas encouraged them to also be thorough in their reports

“Already, the IAAF President Sebastian Coe and his counterparts in the Confederation of African Athletics, Hammad Kalkaba has given commendations to the Delta State Governor, Ifeanyi Okowa for providing a legacy in Delta state with the Stephen Keshi stadium and other facilities put in place for the African Championships.” Mr. Thomas stated.