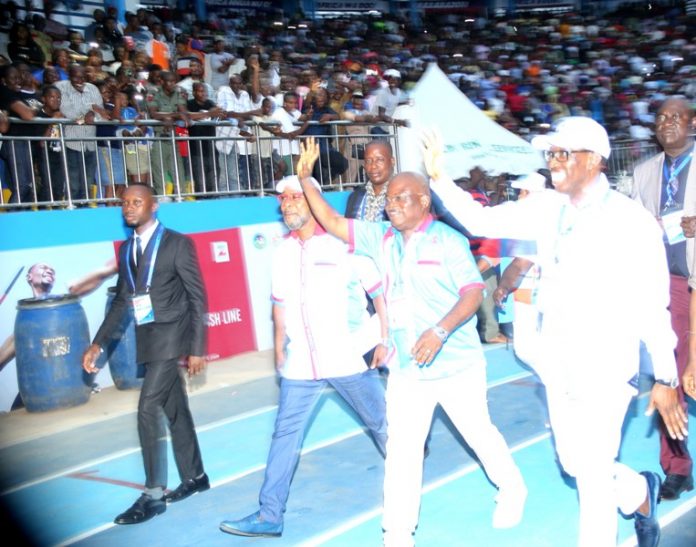 The Chairman of the Local Organizing Committee (LOC) of the just concluded African Senior Athletics Championships, tagged “Asaba 2018”,Solomon Ogba, has threatened to drag a former presidential spokesman and veteran Journalist, Mr. Reuben Abati to court over a critical article on the championship.

Mr. Abati had in a viral article criticised the poor organisation of the whole exercise describing it as a national disgrace.

But in his reaction, LOC chairman, Mr. Solomon Ogba, in a statement signed by Mr. Olukayode Thomas, head of media, LOC, said it is regrettable that Abati wrote authoritatively about a subject he has no first hand information on, saying its unfortunate and disgraceful.

“Dr. Abati, a respected journalist, has a right to his opinions but to describe the organization of CAA Asaba 2018 as a disgrace shows he is acting in a manner that suggests that he is being used. He was not in Asaba, so why write authoritatively about an event you did not witness?.

“I am sure if he had contacted his junior colleague, Olukayode Thomas, who is our head of Media, he would have gotten some firsthand information and clearer insight. He could have called to check his facts and would have saved himself all the embarrassment the falsehood he penned is causing.

“He wasn’t even ready to give the organizer the benefit of the doubt. It is lamentable that a writer of Abati’s stature in the media is relying on unverifiable information available on online media to write a sensitive article’’.

Mr. Ogba said the championship had hitches which were dealt with swiftly and the few countries involved were grateful for the manner in which the issues were resolved.

“Compared to previous African Championships, we witnessed the least complaints, especially in the areas of feeding, accommodation and transportation”.

According to Mr. Ogba, contrary to Abati’s story, no country slept at the airport for three days, “Regular travellers like Abati know that our airports shut down by 11pm, so how can people sleep in an airport that is completely closed down by night? We had four hotels in Lagos. They include the two Ibis near the airport and Novotel where the athletes and officials that could not connect a flight to Asaba stayed and Abati is free to contact the management of the hotels.”

The LOC chairman said Abati was in a hurry to do a hatchet job and therefore did not tarry to carry out his research properly before going to the press, “A simple Google search would have told Abati that Ibrahim Gusau is the President of the Athletics Federation of Nigeria (AFN) and not Solomon Ogba. The search machine would also have informed Abati that it was not the AFN that organized the championships. Google would have supplied Abati facts to show that Team Nigeria under AFN was just one of the participating countries and that Tanzania is one the few countries did not even participate”.

The chairman said Abati is a neophyte in athletics and that explains why he swallowed the stories he read online of a bad track hook, line and sinker.

“Asaba 2018 has the highest number of world class athletes in Africa in recent times. If the track was bad, they will not run. Why would they riskvtheir careers if the track was unfit for running? Caster Semenya ran a sub-50 to win the women 400m, Tobi Amusan ran a sub-13 to win the 100m hurdles, athletes who are running with caution don’t return such fantastic times, times good enough to win either the Olympic Games or IAAF World Championships.

“Asaba Championship is the first ever championships were athletes got prize money for performances and were countries get transport allowances. Abati ought to have been better informed by sources in the know of sports related affairs.” the statement said.

Mr. Ogba therefore demanded a retraction from Abati within 48 hours or face a lawsuit.