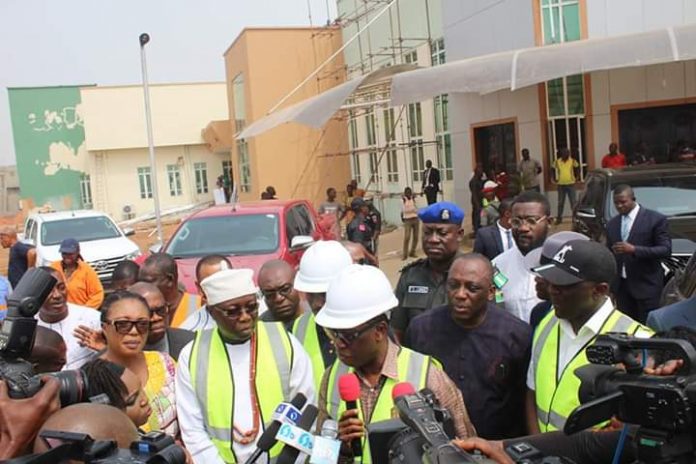 The decision by the Delta state governor, Ifeanyi Okowa to convert the late Maryam Babangida’s Women Development Centre, Asaba, to an Appeal Court have continued to generate controversy.

Former Delta state governor, Emmanuel Uduaghan had built the structure during his administration as a mark of respect and honour to immortalise the former first lady wife of former head of state General Ibrahim Babangida, who hails from Asaba.

The foundation laying ceremony of the edifice which was performed sometimes in 2012 by husband of the late first lady and former head of state, General Ibrahim Babangida, in Asaba, was partially demolished by Okowa and being reconstructed to Appeal Court, an action greeted with series of mixed reactions and feelings from indigenes of Asaba and Deltans.

Condemning in strong terms the demolition and conversion of the late Maryam Babangida Women Development Centre, to Appeal Court by governor Okowa, some Asaba indigenes who are members of the Peoples Democratic Party, (PDP), and All Progressives Congress, (APC), described the governor’s action as misplaced priorities and means to siphon the state treasury.

An indigene and staunch member of the APC, who simply identified himself as Obodo, lambasted governor Okowa for converting what he called “status” that represent “The image of our illustrious daughter, a former first lady of this great nation and wife to former head of state, Gen. Ibrahim Babangida.

“Our sister, Maryam, brought joy and respect to Asaba. For some of us, we are not surprised, because Okowa is fond of either destroying or converting projects executed by the Uduaghan’s administration. Okowa has destroyed all Uduaghan’s legacies since he assumed office as a governor. Five years gone, still no single legacy by Okowa, apart from appointment letters scattered all over the state.”

Several political associates and allies as well as supporters of former governor Uduaghan also condemned governor Okowa’s action of partially demolishing centre and converted it to an Appeal Court when it would have been easier for the governor to look for a fresh land and build the Appeal Court, rather than destroying his predecessor’s legacies.

Reacting to the development, former women affairs commissioner in Uduaghan’s administration, Betty Efekodha, whose purview the centre fell under, condemned the conversion by Okowa, accusing the current administration of “robbing Peter to pay Paul, which is not the best.”

The former women affairs commissioner noted that the importance of the women centre can not be over emphasized, more so, it was named after an “illustrious” daughter of Delta who made women to be seen and heard through her Better Life pet program.

“This would have gone a long way in improving the lot of women all round, as the edifice housed a very big hall plus smaller adjoining  halls and different offices for meetings, trainings, seminars, hall of fame and skills acquisitions .Also play host to national and international women programs and events.

“It is definitely a big plus to women development. In as much as the Court of Appeal is necessary and I appreciate the governor for it. Robbing Peter to pay Paul is not the best. I therefore appeal to my national president and state chairman  to please look into it, if possible, a delegation can see our governor.”, Efekodha, lamented.

Meanwhile, inspecting the Court Of Appeal complex, Monday, Delta state governor, Ifeanyi Okowa, said the Court of Appeal Complex for the Asaba Division would be inaugurated soon as finishing touches are been done.

Okowa, expressed satisfaction with the level of work done so far on the project adding that “four states were approved to have Courts of Appeal and I am happy that we are set, everything is in place as we will meet with the date set for its inauguration. With a division of Court of Appeal in Delta, there would be speedy delivery of judgment for the people.”