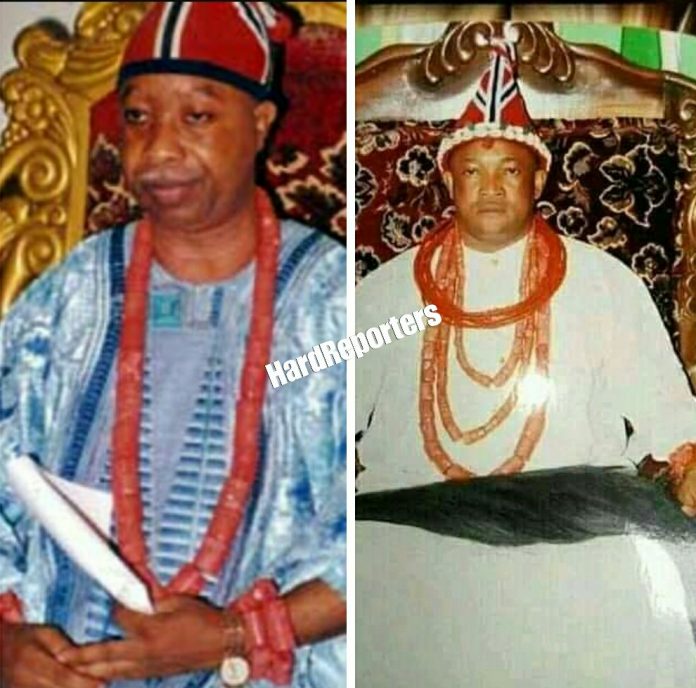 Delta state oil rich Uzere community, Isoko South local government area, has again for the past three days engulfed in a fresh bloody crisis resulting to all night gun shooting, maiming, burning of houses and cutting of persons with machetes.

Uzere is a kingdom, said to be currently having two traditional rulers following several years of unabated bloody crisis which claimed several lives and properties worth millions of naira over oil related matter, which forced the kingdom in 2011 to dethrone his king, Isaac Udogri 1 and sent him on exile and installed another new king in the person of Henry Ukenukpepia, Etuwede III.

HardReporters reliably gathered that the renewed crisis is as a result of the returning of the dethroned king, Udogri 1, who had gone on exile, while the new installed king to replace him, Etuwede III has vehemently refused to relinquish the throne, a development which has left the kingdom with two kings.

It was learnt that the renewed crisis started since Thursday last week and lasted till Sunday, leaving several properties worth several millions of naira damaged while persons from bother sides are said to be receiving treatments at various hospitals from wounds sustained during the clash.

Speaking to our correspondent an indigene of the community who simply identified himself as Oghenekome, alleged that the return of the dethroned king was facilitated by “The MD, Delta State Oil Producing Areas Development Commission, (DESOPADEC), Isoko Development Union, (IDU) President General and others using the instrumentality of the state government to chase away the new king, Etuwede III, that was installed by the community and facilitated by the IDU President General to replace the dethroned king, Udogri I.

“There is a serious gang up now against Henry Ukenukpepia, Etuwede III, the installed new king when the dethroned king went on exile. Followers of Udogri I are now going after the followers of Henry while in turn the followers of Henry are retaliating, so, there has been this attack and counter attacks from both sides. But, the side of Henry is been mostly affected.

“Since the dethroned exiled king was brought back to the community on February, 16, by these cabal, the fragile peace in the community disappeared immediately. Udogri I is the government recognised king who went on exile following a bloody crisis in the community over oil matter and his palace was burnt down and the community installed Henry Ukenukpepia, Etuwede III since 2011 as the new king.

“And upon the return of the dethroned exiled king, Udogri I, the one installed by the kingdom to replace dethroned Udogri has refused to quit the seat. Uzere community is now known as a bloody kingdom. All the crisis has to do with oil money and contracts. Don’t forget also that since last year there has been this crisis of N20 million given to the community by NPDC which divided the entire community into factions armed with guns and dangerous weapons unleashing mayhems.

“Even one of our illustrious sons based in Lagos called Sam told us how he had to give N1 million to a faction to submit their guns. Though he was a strong supporter of that faction because a company which he has interest as a director was been used to get trade with the community where millions of naira was paid into instead of the community’s account.”

It was reliably gathered that as at few days ago a team of police from the force headquarters, Abuja stormed the community to arrest the other factional king, Henry Ukenukpepia, Etuwede III, following a petition allegedly sponsored by the President General of Isoko Development Union, (IDU).

Some indigenes of the community who spoke in confidence who condemned the unabated crisis accused some politicians, government officials and leaders who hail from the community of feeding fat from the crisis.

A local source told our correspondent that the palace of Etuwede III is currently been guarded by the military to avoid it been set ablaze by supporters of dethroned king that has returned to the community and tension has continued to rise in the community.

Speaking on the current crisis rocking the community, the dethroned king, Isaac Udogri I, accused an illustrious son of the kingdom and former chief of defence staff, General Alexander Ogomudia (retd) of sponsoring and funding the Etuwede III faction as well as giving them military backing to commit havocs on the community.

Udogri I, called on the state government and security agents to urgently come to his rescue over what he described as coordinated attack on his subjects by masked men in military uniform allegedly been aided by a highly placed son of the kingdom and former military officer.

“A single person cannot claim to be a law and cannot be above the law and it is high time they should be called to order for peace to reign in Uzere. There is no other king In Uzere and anybody parading himself is an imposter. I am the king gazetted, recognized by the government and given a staff of office.”

Our correspondent recalled that before now the former chief of defence staff, General Alexander Ogomudia (retd), and another son of the kingdom, Sam Ogrih had been accused of sponsoring and funding the armed youths on the faction of Etuwede III to unleash terror on the other faction belonging to Udogri I, though an allegation, Ogomudia and Ogrih have since denied.

Speaking on the crisis, the chairman of Isoko South council, Itiako Ikpokpo, described the current crisis as unfortunate, saying that he has convene a security meeting of stakeholders to hold Tuesday at the council to examine the remote causes of fresh crisis in the community.

“I have called a security meeting of stakeholders in the council; we are meeting with the leaders and the parties to the crisis to come and tell us why we have to experience this kind of thing. It is worrisome, so let them tell us why they are fighting. So the government is doing something about it.”

The member representing Isoko South 2 constituency in the Delta State House of Assembly, Ferguson Onwo, has called on warring parties in Uzere community to sheath their swords and give peace a chance.

The lawmaker who was reacting immediately after Tuesday’s plenary, described the feud as an unnecessary distraction to the development of the community and appealed to stakeholders to approach the peace process with sincerity.

As at the time of filing in this report, the house of the former President General of the community, Columbus Oguname, is said to have been razed down by the faction belonging to the returnee dethroned exiled king, Udogri I.

When contacted on the issue, the Delta state Police Public Relations Officer (PPRO), DSP Onome Onovwakpoyeya, confirmed the renewed crisis adding that it is a fall out from the 2011 crisis that engulfed the community and had the palace of the exiled king recognised by government burnt down.

“What is happening in that community now is a long time crisis caused by oil matter that has been on ground which led to the burning down of the palace of the king who went on exiled and he is the recognised king by government. He returned to the community on the 16 of February 2020.

“The crisis is between the returned king recognised by government and the parallel king installed by the community while the other was away. However, as at this moment no arrest has been made so far concerning the current crisis. But peace has returned to the community now as I speak with you.”