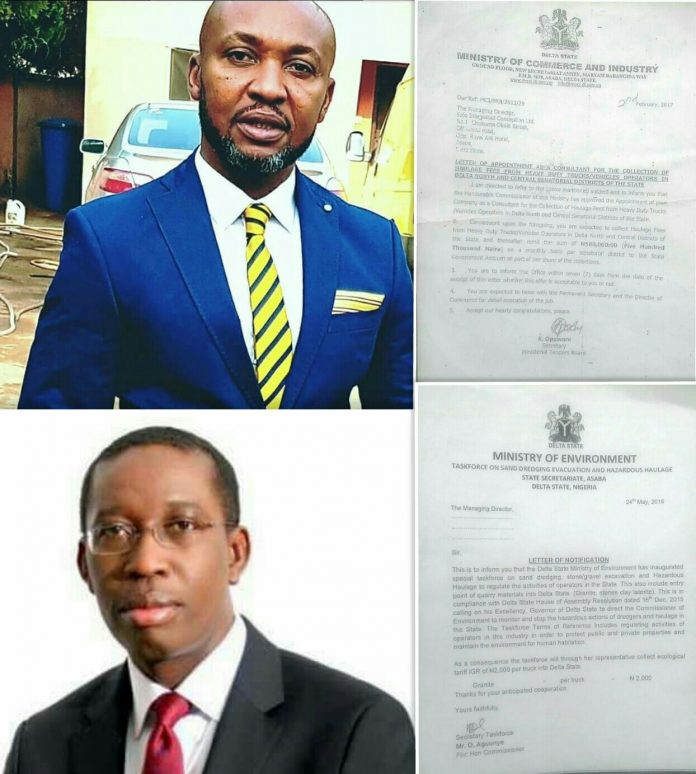 HardReporters recalled that last month, governor Ifeanyi Okowa had allegedly splashed over N200 million into sponsoring the publication and unveiling of his own biography and two other books authored by his younger brother, Mr. Solomon Okowa.

An appointment letter certifying the governor’s brother as consultant in revenue collection, exclusively obtained by HardReporters was issued by the state Ministry of Commerce and Industries. The letter appointed Mr. Solomon Okowa as consultant for the collection of haulage fees from heavy duty trucks and vehicle operators and to over see whole of Delta North and Central senatorial districts of the state.

According to the letter dated 2/2/2017 with ref. No. MCI/PRS/2512/29, signed by S.O. Opuware, secretary ministerial tender board and reads thus “I am directed to inform you that the Hon. Commissioner of this ministry has approved the appointment of your company, Solo Integrated Conception LTD as consultant for the collection of haulage fees from heavy duty trucks and vehicle operators. You are expected to remit #500, 000 each on monthly basis to government account as per her share of the collections.”

Another letter of appointment obtained by our correspondent without ref. no, dated 24/5/2016, signed by one Mr. O. Aguonye on behalf of the commissioner,
Ministry of Environment appointed two cronies of the governor, one Mr. Sunny Nwaolokor and Mr. Akponwan, as taskforce on collection of N2, 000 per vehicle carrying granite.