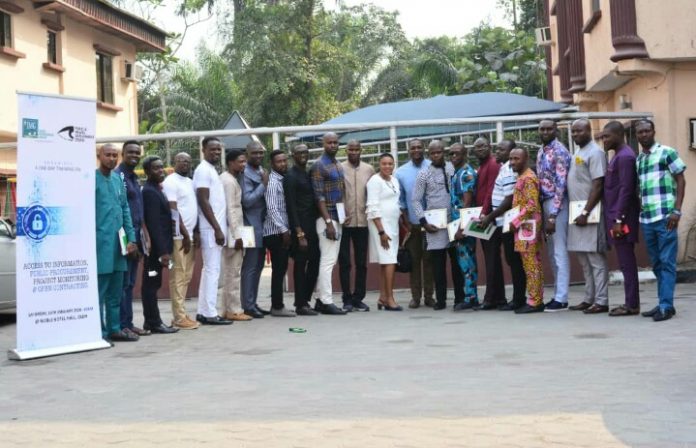 An Isoko vocal, unbiased and non partisan group, Isoko Monitoring Group (IMG) said it has fully prepared to wage war against any form of shoddy and abandoned projects in Isoko nation and Delta state in general.

According to the group, which named the Emore road Oleh, the Ikpide-Irri township road, Isoko South council area and Ozoro-Idheze road, Isoko North council, as well as abandoned projects are some of the projects earmarked to wage war against, saying that the group known for her straightforward disposition, shall engaging in meaningful partnerships with renowned budget and contracts implementation monitoring NGOs and anti corruption agencies.

In its’ bid to be more informed and arm herself with the rudiments of how to win her war against shoddy and abandoned projects in Isoko land in particular and Delta state in general, IMG, on Saturday kick started the year 2020 with partnership with the Public Private Development Centre, (PPDC), an Abuja based Non Governmental Organisation (NGO) of international repute which championed and authored the Public Procurement Act.

Declaring the event open, President of IMG, Oke Michael, (PhD), noted that despite contributing so much to the treasury of Delta State and Nigeria, the Isoko ethnic group has been grossly marginalized in terms of projects distribution in the state and federal annual budgets.

According to the group’s President, Oke, who charged all the 26 professionals of Isoko extraction drawn from all works of life, “The Participants were carefully selected based on their antecedents toward selfless agitations and general development of the society.

Oke who said IMG is also ready to partner with governments at all levels to ensure that quality projects that meet contract specifications are henceforth executed in Isoko land.

“The development in the Niger Delta region is not commensurate to the wealth that the region is contributing to the commonwealth of Nigeria. We put this very important training on Access to Information, Public Procurement, Project Monitoring and Open Contracting together to equip the Isoko people and critical developmental advocates with the needed skills, knowledge, ideas and insights to demand for fair projects placement on our national and state budgets, track those projects and monitor the execution of such projects in Isoko land, Delta and Niger Delta.

“It is expected that at the end of the training all participants should be able to pass knowledge acquired to others and also use same as foundation to hold government, its agencies, elected representatives and contractors accountable. We cannot continue shying away from the unabated abandonment of public projects as well as the execution of substandard projects across the country.

“If a contractor must take public projects and be made to handle public funds, such contractors must be ready to follow the Bill Of Quantity (BOQ) of such projects to the latter. Also, the awarding agency must be transparent in the budgeting, procurement and contracting processes and be willing to make available to the public information on the projects so that the public can take ownership and monitor their executions. The common sharp practices of cutting corners must be discouraged and discontinued.

“We call on government and the agencies responsible to see it as a matter of public importance to implement the Freedom of Information (FOI) Act by bringing defaulting agencies to justice. This will encourage openness and greatly promote anti-graft war. After this training, we will not just be able to hold government accountable, we shall also monitor ongoing projects in our communities and ensure they are done according to specifications”.

While commending IMG and PPDC for the training, one of the participants, Angela Ukponmwan at the end of the training said, there was need for elected representatives to be proactive and more people-oriented by amending the punishment attached to defaulting agencies who fail to obey the Freedom of Information (FOI) Acts.

She also called on states that are yet to domesticate the FOI Act to do so in the interest of transparency and accountability, which she said are the bedrock of a thriving democracy. She expressed delight that with the training advocates and activists of development will be more forceful, informed and grounded in their agitations.

The training, which was facilitated by an official of the Public and Private Development Centre (PPDC), Onyekachi Chukwu, held at the Noble hotels, Oleh, headquarters of Isoko South local government are of the state, attended by professionals across the Isoko nation, touched on Access to Information, Public Procurement, Project Monitoring and Open Contracting aimed at equipping members and other critical stakeholders within Isoko with the required knowledge needed to take ownership of public projects and hold government and contractors handling such projects accountable.

PPDC as a body, no doubt, has attracted massive funding from the Bill and Melinda Gates foundation and as well responsible for the conviction or ongoing trials of several public servants/former public servants through her sophisticated projects monitoring tools and networks.

With this initiative, IMG is said to be putting all contractors on notice that Isoko land is no more safe for anyone to execute shoddy jobs as every one naira released for projects in the land will henceforth manifest physically as a durable infrastructure and anything short of that, they will strengthen partnership with similar organisations to ensure that every kobo meant for projects in Isoko which enters private pockets are vomited.

IMGs Partnerships with anti graft agencies and other civil societies such as SERAP is to empower her with the right tools to get access to information including details of awarded contracts, funds released, and to monitor projects execution against contracts specifications and level of fund released.