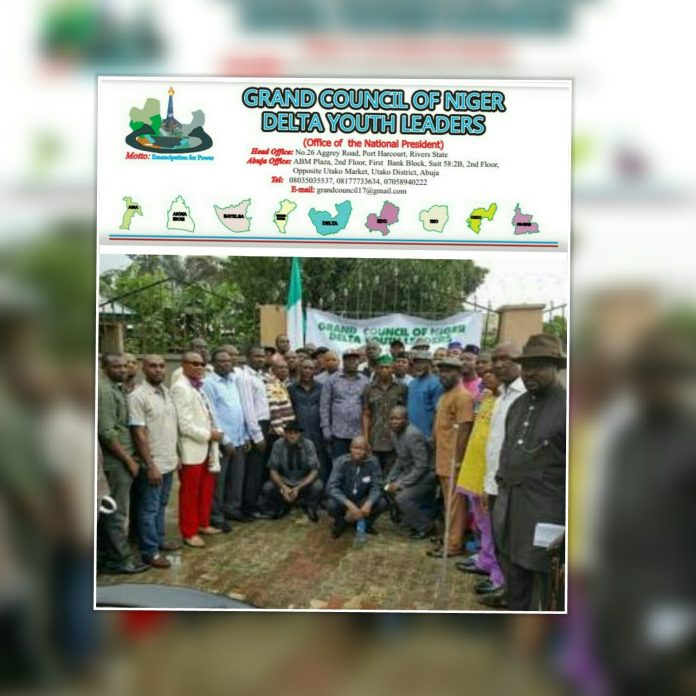 A grassroot non-violent organization of youth leaders cutting across the nine states of the Niger Delta region, Grand Council of Niger Delta Youth Leaders, have unequivocally condemned in totality the October 1st quit notice issued to the Igbos living in the Northern part of the country by the Coalition of Northern Youth (CNY).

The Niger Delta Youth Leaders Council which was reacting to the quit notice and other issues of national interest, called for
the immediate restructuring of Nigeria saying its the only panacea to the political and economic crisis facing the country at the moment.

In communiqué issued recently after an enlarged meeting of the council in Benin City, Edo state, signed by its National President, Mr. Godwin Ikogho, its National Secretary, Mr. Cosmas Akuneho and the Grand Leader, Mr. Clement Awakessien, and mailed to HardReporters, noted that the tension and the resultant crisis currently in the country was exacerbated by the “unfortunate and unwarranted three (3) months notice to quit, issued to all Igbos resident in the North by the Coalition of Northern Youth (CNY), which expressly or impliedly expires on the 1st day of October, 2017.”

The council while noting with great concern that in recent times, the very foundation of the country has been shaken to the point that a lot of people are getting worried, disturbed and frightened, warned that if nothing is genuinely done to reaffirm the nation’s unity, the end of the entity called Nigeria could be close at hand.

“At the base of this unfortunate situation, is the various agitations and threats of secession by the Republic of Niger Delta (RONDEL), Oduduwa Republic, and the breaking silence of the middle belt. These various agitations and threats are clear indication of system failure, such that those who are contributing less to the nations treasury are benefiting more than those who are contributing more as the Niger Delta.

“The fact that there are cries of marginalization from almost all Nigerians irrespective of tribe, religion or political affiliation, underscores the fact that something is fundamentally wrong with the structural arrangement of the country, hence, we unequivocally resolve and declare accordingly as follows:

“We in unmistakable terms condemn in totality the said notice to quit as it threatens the corporate existence of Nigeria. That immediate restructuring of the country is the only panacea to the political and economic crisis facing the country. The modern concept of sustainable development is a process that must begin with the active consultation and participation of the people, therefore the need for a referendum is imminent, on whether the various ethnic nationalities in Nigeria are desirous to live together and on what conditions.

“We propose an all encompassing national youth confab as a result of the non proportionate representations of the youths in the last National confab, hence we reject a directive by the National Assembly for the Executive to present to it the 2014 constitutional conference report. In this age every federating unit in renowned democracies must be able to pilot its own developmental affairs in accordance with available material resources, its space and socio-cultural peculiarities and uniqueness, hence in plain statement we advocate fiscal federalism based on resource control.

“Let it be crystal clear that in the event that the coalition of Northern youths executes their planned threat to dislocate any Nigerian wherever they reside, then the unity of this country will become negotiable. The piece meal and inconsistent amendment of the 1999 constitution currently done by the national assembly is totally unacceptable, and we declare that a true federal constitution be put together by Nigerians for Nigerians.” the communique declared.

The Niger Delta Youth Leaders Council, prayed for the quick recovery of President Muhammadu Buhari and commended him on the fight against corruption so far, with the hope that the fight would be deepened and sustained.