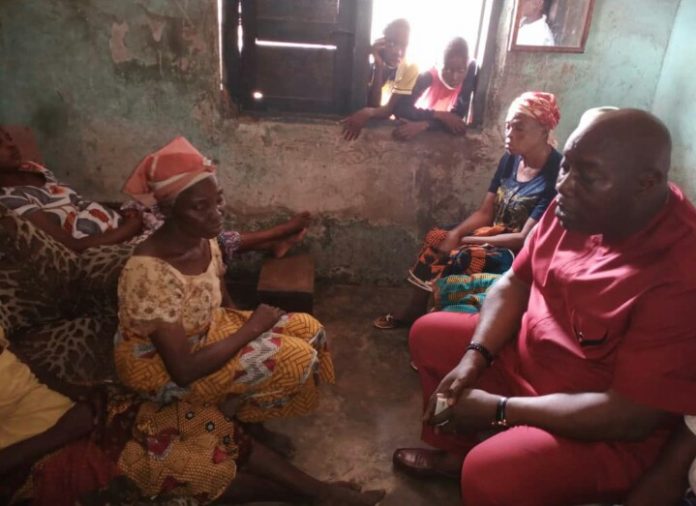 The member representing Isoko South Constituency 1 in the Delta state house of Assembly, Hon Kenneth Edafe Ogba, has appealed to the people of Oleh kingdom, Isoko South local government area of the state, especially the bereaved families whose nine family members were gruesomely murdered by unknown person at a farm on Friday to remain calm.

It would be recalled that no fewer than nine indigenes of Oleh community, headquarters of Isoko South Local Government Area of Delta State, were gruesomely murdered on Friday at a farm by yet to be identified armed men.

Reacting to the unholy act in a statement personally signed by Kenneth Ogba, on Saturday, shortly after visiting all the affected bereaved families in Oleh, the legislator cautioned the two communities to as a matter of importance sheathe their swords and allow peace to reign while investigation into the gruesome murder of the nine Oleh indigenes is being carried out.

Ogba while describing the act as barbaric and satanic, appealed to the bereaved families and the Oleh community not to take laws into their hands by way of a reprisal attack even as he called on security agencies to carry out an in depth investigation and fish out the perpetrators of the dastardly act and bring them to book without delay.

The lawmaker, admonished all and sundry to desist from spreading rumours that could escalate the already tensed situation. Oleh and , adding that the government of Delta State was doing everything humanly possible to get to the root of the issues that provoked such inhuman act.

“I was shocked when I received the sad news of the gruesome murder of some of my Oleh people. While I commiserate with the deceased families and Oleh community, I trust in the capacity of the security agencies to investigate and fish out those miserable elements behind this barbaric act.

“As a people we must learn to leave in peace and follow laid down procedures in settling disputes. I am sad that as a nation, we cannot leave in peace and harmony. I am using this opportunity to call on Oleh community to please remain calm and allow peace to reign while security agencies investigate the gruesome murder.”, Ogba stated.