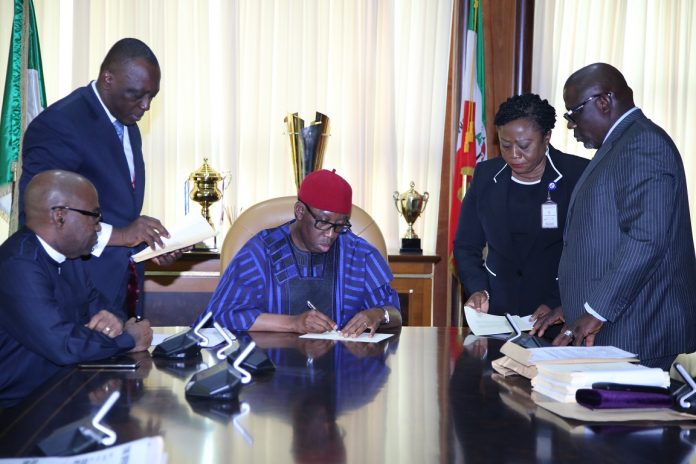 The governor while signing the bill Thursday in his office, government house, Asaba, said the early signing of the bill into law will give his administration room to utilise the dry season to engage in construction works.

According to the press statement from the press unit, government house, Asaba, the governor said, “this is very important for governance, because, it gives us room to utilise the dry season to construct roads and provide other infrastructures before the commencement of the rainy season.”

Okowa commended the Delta State House of Assembly for the early passage of the appropriation bill, describing the state legislature as great partners in the delivery of dividends of democracy to Deltans.

“With the signing of the appropriation bill into law today, it means power has been given to the executive to start implementing the budget; we now have enough room to perform,” he asserted, adding, ” with the cooperation and partnership of the Delta State House of Assembly in the course of 2018, we have worked in harmony putting Delta State first; together in the last three years plus, we have been able to impact positively on infrastructure development, we have constructed roads, built a lot of schools, improved on the health facilities and provided a lot of jobs for Deltans.”

He continued, “due to our achievements, there is peace in Delta State; we thank Deltans for the partnership, it has yielded great results and we are confident that as we are leaving office in 2023, we would have left a lot in the state that we would be proud of and Deltans will be happier.”

It would be recalled that Governor Okowa had on 17 October, 2018, presented a budgetary proposal of N367 Billion to the Delta State House of Assembly.

Presenting the approved bill to the governor for his signature, the Speaker of the State House of Assembly, Sheriff Oborevwori, accompanied by the Clark of the House, Mrs. Lyna Ochulor and other principal officers, disclosed that the bill as presented by the governor passed through rigorous process before it was approved.

“The bill passed through all the processes as it was designed to consolidate on the achievements of the governor,” Oborevwori said.