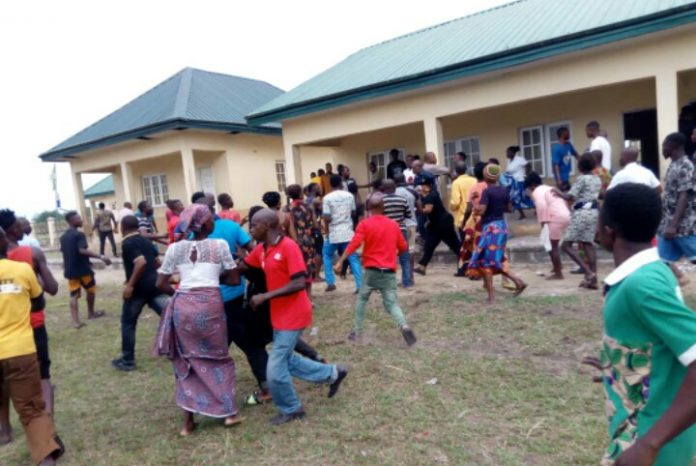 The Erohwa/Umeh PDP ward 08, congress was said to have ended in a bloody atmosphere following the vehement refusal of party members to accept the imposition of one Peter Ayetuovo as the chairman of the party in the ward.

HardReporters reliably gathered that trouble started when party members had lined up to participate in the ward congress when one Odiri Alade, Special Assistance to governor Ifeanyi Okowa on youth and community development allegedly disrupted the process with some hired political thugs.

Our correspondent gathered that the governor’s aide who is alleged to be working on the instructions of the Managing Director of Delta State Oil- Producing Areas Development Commission ( DESOPADEC), Askia Ogieh, had gone to the venue of the congress to impose one Peter Ayetuovo as the chairman of the party in the ward but was vehemently rejected by the people.

It was learnt that as the rejection of the imposition of Ayetuovo, builds up, the hired thugs immediately launched attack which left one Saturday Eneriakpoze, a former councilor and one Oyibo Emmanuel and others with injuries.

Speaking with our correspondent, the injured immediate pasted councillor representing the Erowha/Umeh ward 08, Saturday Eneriakpoze, stated that following the people rejection of Ayetuovo as the chairman of the party in the ward, the hired political thugs attacked them with weapons.

“The PDP ward congress did not hold in the Erohwa/Umeh 08, it ended badly with so many party members soaked in their blood following the attack by hired thugs because, we rejected the imposition of Peter Ayetuovo, who is a total stranger who is not known in our ward.

“The said Peter Ayetuovo has not participated in any party’s activities from inception till date. This said Peter Ayetuovo is a thorough Uzere breed Erohwa man whose activities both political has not been taken to Erohwa for once. He’s a total stranger in the land who is been imposed on the ward and we vehemently opposed to that.”

Other party members who spoke to our correspondent lamented and blamed the incident on the Managing Director of Delta State Oil- Producing Areas Development Commission ( DESOPADEC), Askia Ogieh, who they accused of imposition of party officers across the local government area from wards to local government because of his alleged 2023 house of representatives ambition.

It was gathered that members of the party scampered for their lives as soon as the attack was unleashed on them while some of the injured party members are said to be receiving medical treatment outside the ward following the degrees of their wounds.

As at the time of filing this report when a Journalist put a call across to the Managing Director of Delta State Oil- Producing Areas Development Commission ( DESOPADEC), Askia Ogieh, he denied any involvement in what happened at the Erohwa/Umeh Ward 08 saying”I don’t know anything that happened at Erohwa/Umeh Ward 08. I am not from Umeh, I am from Uzere, I am not even in Delta state presently as we talk I am in Lagos.”