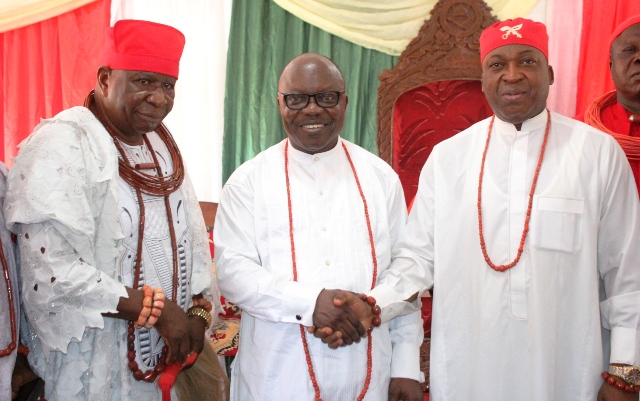 Barely three weeks and few days to the 2019 general elections, immediate governor of Delta state and the Delta South Senatorial candidate of the All Progressives Congress, (APC), Emmanuel Uduaghan has received what could be described as a shocking royal “unalloyed support” from Isoko South and North local government areas traditional rulers in Delta state.

The royal shocking support was accorded Uduaghan Wednesday during his campaign rally visit to the two local government areas traditional rulers to the Isoko North and South local government areas of the state at the palaces of the Ovie of Ozoro kingdom, HRM Anthony Ogbogbo, Ibuka 1, and Odiologbo of Oleh kingdom, HRM Anthony Ovrawah, Omogha 1 respectively.

In his message to the people, Uduaghan promised that “If elected as Senator, I will push for the recognition of the traditional rulers in the constitution of the Federal Republic of Nigeria which would give them a constitutional role to their people. I will push for communities to have at least 5% ownership of companies operating in host communities in Delta South. This will create jobs for men, women and youths.

“I will also push for communities to be in charge of pipelines surveillance contract as a way of empowerment to our youths. Our youths are only paid peanuts at the end of the day because some persons who are not even from our region are the middlemen. When I become senator, the contracts would come straight to our communities so that our youths would be empowered.”

The immediate past governor who took time to reel out his programs for the Isoko people in particular and Delta South in general, noted that the destruction of localized refineries otherwise known by the government as illegal refineries has caused more harm than good to the people.

“When I become Senator, I will push for the legalization of these localized “refineries”. This will ensure positive engagement across the value chain.”

Responding on behalf of the Isoko North local government area traditional rulers council, the Ovie of Ozoro kingdom, HRM Anthony Ogbogbo, Ibuka 1, expressed gratitude to the former governor for taking the traditional institution in the state to a greater height, saying “Your Excellency, your reign as governor of the state brought smiles and joy to this institution.

“You are somebody that fought for the traditional institutions when you were in office as the state governor and as a result of that we are throwing our unalloyed support behind your senatorial candidature. We admired your talk as you reeled out your plans for our people, they were issue based without attacking any personality. Your coming today is like an eye opener to us. You reminded us of so many things we don’t know before now in the oil sector and as oil producing communities.”, Ogbogbo said.

On his part on behalf of Isoko South local government area traditional rulers council, Odiologbo of Oleh kingdom, headquarters of Isoko South local government council of the state, HRM Anthony Ovrawah, Omogha 1, described former governor Emmanuel Uduaghan as an illustrious son of Isoko land whom if given the opportunity to represent the Delta south senatorial in the red chamber, will do much more better.

“I have opened the door of the senate to Dr. Emmanuel Eweta Uduaghan because he is an illustrious son of Isoko nation and we have confidence in him. We know him. Isoko nation benefited immensely during your tenure. You are one of us. Before your visit, my people, fellow traditional rulers and I have resolved to throw our support behind you and the Itsekiris. The position belongs to three children. It is the turn of the Itsekiris.” the monarch asserted.

HardReporters correspondent reports that the former governor was accompanied on the visit by the All Progressives Congress, (APC) candidate of Isoko federal constituency, Joel-Onowakpo Thomas (JOT) among others top leaders and elders of the APC in Isoko, Itsekiri and Ijaw.

High point of the two separate visits was prayers and royal blessings showered on the former governor and the APC Delta South Senatorial candidate, Emmanuel Uduaghan by the traditional rulers.