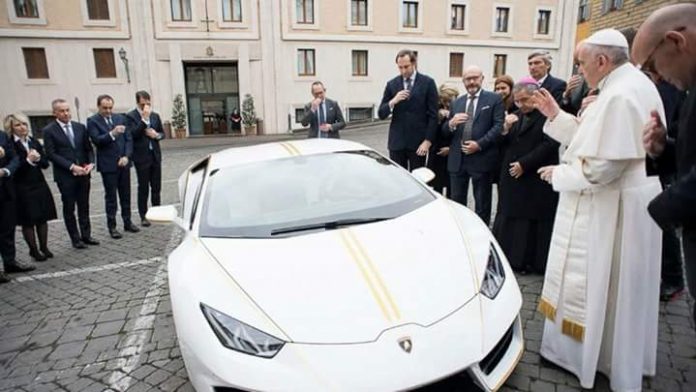 Pope Francis received a Lamborghini a personalised white supercar on Wednesday, but he put it up for auction to raise money for charity rather than give up his trademark popemobile.

The Huracan sports car, which boasts a 610 metric horsepower, was blessed by the pontiff, who bent to scrawl his signature on its gleaming bonnet before it was sent off to Sotheby’s auction house.

The supercar usually goes for around 200,000 euros ($237,000), but this model featuring gold stripes and gold-rimmed wing mirrors in homage to the pope’s gold-tipped stole is expected to beat that.
The money raised will go to four charitable projects, including one aimed at rebuilding the homes and churches of persecuted Christians in the Nineveh Plains in Iraq. 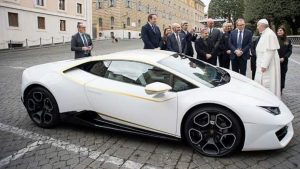 The Lamborghini will also help fund an Italian association helping victims of human trafficking and prostitution rings, as well as two organisations active in Africa aimed at supporting vulnerable women and children.

It is not the first time the Argentine has received a high-speed gift: in 2014 he was given a Harley Davidson motorbike and jacket, both of which he auctioned off for charity.

The famously humble pontiff is more of a fan of buses. He opted to ride one the day after his election in 2013 instead of taking a limousine, and regularly used them in his homeland Argentina instead of taxis. 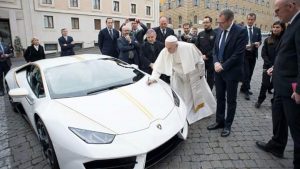 The pope, who loves to be close to the people, has stuck doggedly to using his open-topped popemobile to move through the crowds at masses at both the Vatican and on foreign trips, despite security fears.

He has stayed faithful to the white all-terrain vehicles with bubble tops despite an accident in Colombia this year in which he lost his balance while it was moving and ended up with a black eye.

AFP reports that historically, popes moved around on a “sedia gestatoria”, a ceremonial red silk-covered throne which was carried on shoulders until the 20th century, when it was swapped for the popemobile.